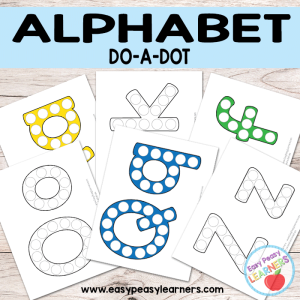 Over the weekend I was playing with my three year old nephew who has been busy practicing letter recognition for preschool.

While looking at his name and telling me the letters, he was having trouble recognizing some of them , with A being a most pesky letter for him to recall.

So we decided to do some letter art and make Do-A-Dot letters!

I love this project for two reasons.

And two, because it is multi-sensory and combines several learning modalities.

The more learning modalities you can incorporate into activities, the more your little one will learn!

This letter art learning activity incorporates visual, auditory, and kinesthetic. Not bad, three out of four!

I typically use Do-A-Dot markers for this activity since there are so many great colors to choose from, but since I have them packed away at the moment I pulled out the pink and blue bingo dabbers I had handy from the designer purse bingo I went to a few weeks ago.

I’m sad to report, I was not a lucky winner that night!

But the good news is that the dabbers worked perfectly and my adorable little nugget was none the wiser!

This time around I simply drew a large letter A on a sheet of white paper and he was able to dab along the lines of the letter. 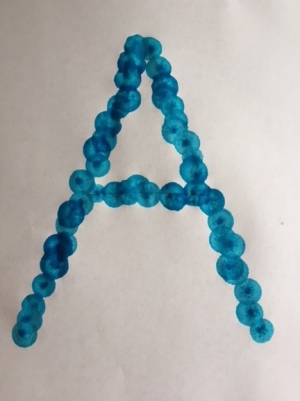 In the past I  have also used these  free pintables at Easy Peasy Learners.

I included a link incase you would like to print them out for your little one to use as well.

Each time my nephew dabbed I had him say A (the letter name) and the next time he dabbed he would say /a/ (the letter sound) in order to give him an auditory cue to learning the name and sound of the letter.

The dabbing was the kinesthetic and seeing the letter A itself with all the colorful dots was the visual.

My nephew had a grand time and wanted to do it again (and again, and again!)

Because he was having so much fun, we continued with the other letters in his name.

When he was all finished, he took his letters and arranged them to spell out his name!

If you want to extend this learning activity for your preschooler and make it a little more challenging, give your nugget two colors to work with and have them create patterns as they dab their letter – pink, blue, pink, blue. (We didn’t quite get there this time!)

Nothing like adding some math patterns while you are practicing letters and sounds!